OMDZ! So much to tell youze. Where do I start?

I’ve been invezztigating more about about how beez make honey, hives, raise bee babeez and all the various hypotheses and hypozabeez for why they are endangered. There are lots of causez. Honeybee probz are pretty much the fault of human beings. Thankz humanz. Tzzzk. 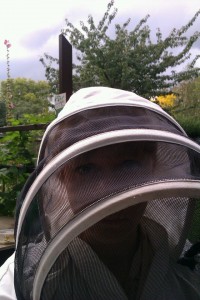 Howevz, I’ve also been speaking to some nize urban bee keepers who tell me wild honeybeez can’t survive on their own. This meanz the only hives you see nowadays are box shaped ones made by humanz.

The biggest threat in the UK is the Varroa Destructor Mite (which found its way here thanks to the way humanz have transported beez over long distances for our bee holidayz- more of this in a future bzlog).

Varroa mites are really vile in every way. One bee keeper I interviewed had to stop himself zzwearing about them. The more I find out about these parazites, the more passionately I feel too. They will make a really good baddy in the Bee Detective story. The have a sort of body armour and blood sucking pincers. These mites could be great to animate.

Mites have built up an immunity to pesticides. I’m told one way to get rid of them is to cover honeybeez with icing sugar. Which sounds like a fun thing to do in our Bee Detective show – throw sugar around. Fighting evil with icing sugar. When beez clean the sugar off, they also knock the mites off their backs. Icing sugar is like dandruff shampoo for beez.

One one particular hive visit, I saw beez eating piles of sugar piled into their comb. I found out that imported New Zealand beez get fed loads of sugar because they’re a bit lazy and can’t be bothered doing much food foraging. Lazy bees! Lolz!

I was fun meeting the bee keeping expertz, especially clambering about on a rooftop to get to the nursery hives. I found it impossible to lipread bee keepers through the protective headgear (coz I’m deaf), so I’ve been taking intrepid zzign language interpreterz with me to translate. My videos are a bit shakey as I was trying to take notes whilst watching the interpreter and film simultaneously. Here’s a quick clip of a few thousand mates on bee tv.

My homies from sophie woolley on Vimeo.