The villain in our play is getting a lot of much deserved publicity in today’s news. New research shows that the varroa mite has helped decimate billions of bees around the world.

Dr Stephen Martin, of the University of Sheffield’s Department of Animal and Plant Sciences said: “Just 2,000 mites can cause a colony containing 30,000 bees to die. The mite is the biggest problem worldwide for bee keepers; it’s responsible for millions of colonies being killed.” 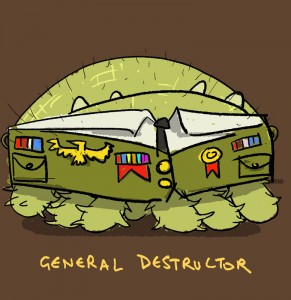 The problem is that humans transport honeybees around the world, and the varroa mites invade new bee populations that way. Bee keepers used to treat infested bees using chemicals, but because the chemicals were made by the same companies that made the pesticides and insecticides spayed on crops, the varroa mites became immune. The mites spread the DWV virus.

Our play shows how you can fight varroa organically, in order to help bees develop their own way of resisting varroa mites. In recent years town gardeners have learnt to farm more organically, and so honeybees have thrived in towns. But the varroa mites are still the main problem for the urban bees like the ones in our show.

Our drone bee Barnabee has the Deformed Wing Virus revealed in today’s news – check out his ragged wings! The mites change the DWV virus making it much more deadly for bees. 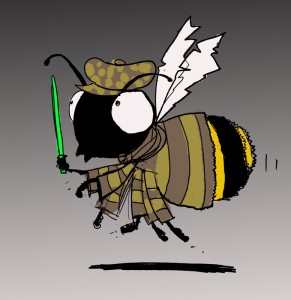